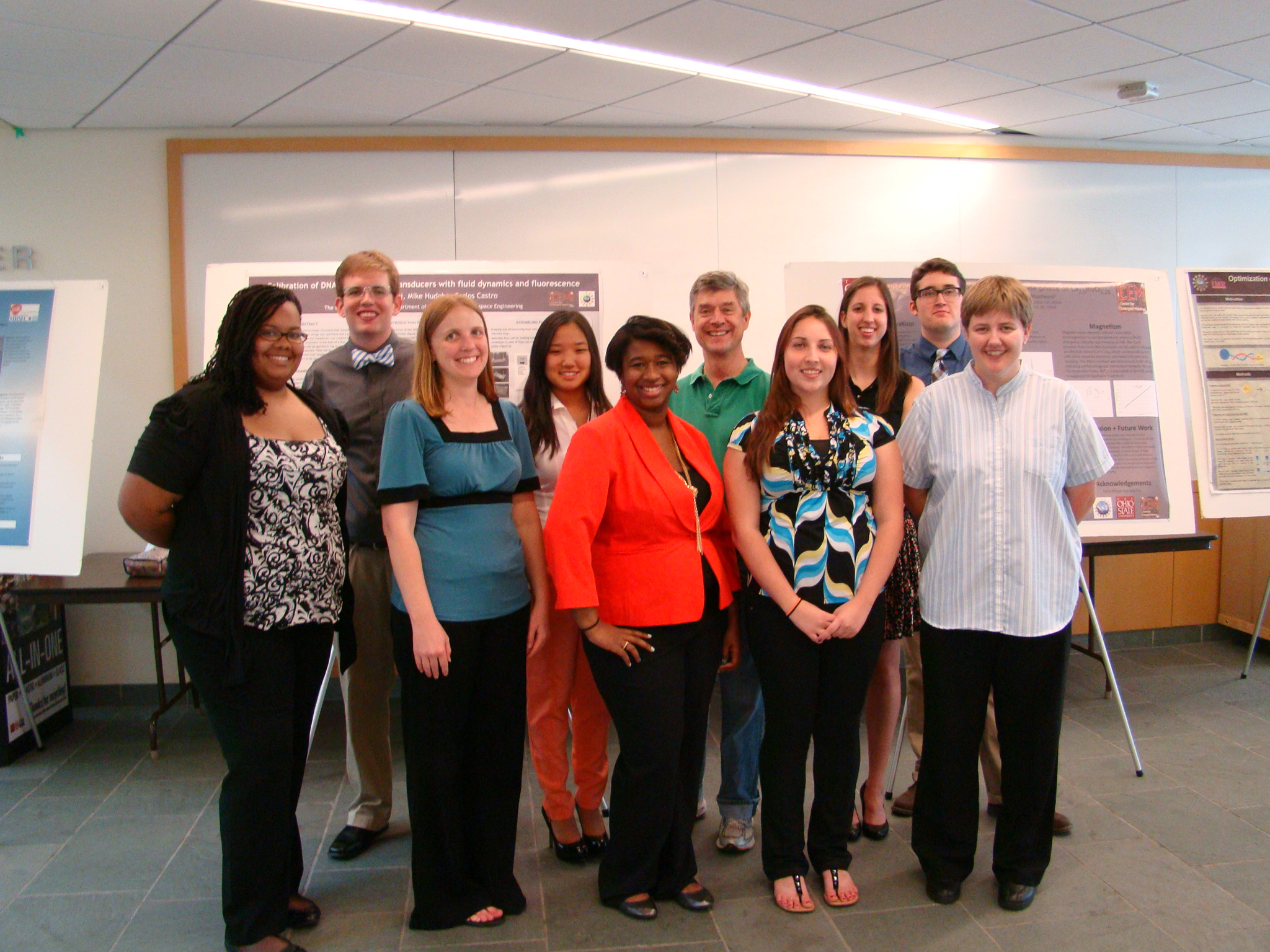 Abstract: Graphene, the two-dimensional carbon lattice with many unique chemical and physical properties has sparked great interest among researchers. The large scale synthesis of the material has not been achieved thus far. Few-layer graphene ( around 4 or 5 layers thick) grown on a nickel catalyst possess rather low sheet resistance and high transparency. These characteristic are the characteristics we hope to grow the graphene for use in organic photovoltaic devices. We found that graphene growth can be carried out on a nickel deposition on a silicon wafer via Chemical Vapor Deposition (CVD). Thus, the production of graphene can become more cost effective.

Project Title: Characterization of Interface Between NovaMin and Dentin

Abstract: Teeth sensitivity occurs when the enamel is worn away and the nerve endings at the end of the dentin tubules are exposed. NovaMin is a dental product that is used to reduce teeth sensitivity by remineralizing the teeth, specifically dentin. Previous studies show that NovaMin occludes dentin tubules, however, there is lack of data proving how NovaMin bonds to dentin. The hydroxylapatite formed by NovaMin is the same natural hydroxylapatite in dentin. This study aims to differentiate and characterize the hydroxylapatite formed in the interface between NovaMin and dentin.

Abstract: Our research has utilized DNA origami to create structures that measure small forces. The analogue force transducer design was optimized and a process for assembling flow cells to calibrate the transducers was created by using chemical properties to attach the structures to the base of a flow cell. A force in the form of a liquid buffer will be applied to tug on attached beads and thus apply a force to the transducers. They will be viewed on a fluorescent microscope to determine their length and calibration. Calibration allows the transducers to be functional and applied to cancer cell research in the near future.

Abstract: A new lanthanum ruthenate phase was discovered, La2.5RuO6.25. Preliminary characterization was conducted. Magnetic measurements indicate paramagnetism to low temp. where a ZFC/FC divergence indicates spin freezing at 10K. Future work will be needed to fully characterize the crystal structure and properties of this new compound.

Abstract: Poly(methyl methacrylate) (PMMA) is a polymeric resist used in the transfer of CVD graphene to a useful substrate. However, its removal is less than trivial and PMMA residue left on the graphene can dramatically degrade the quality of the novel material. In this investigation we explore the use of acetone, hot acetone (~100°C), and acetic acid for the removal of PMMA through Raman spectroscopy and atomic force microscopy. Fourier transforms of the AFM images show that washing with hot acetone produces the smallest features on the graphene surface, and therefore the cleanest graphene.

Abstract: Germanane is a recently developed Van der Waals solid. The covalent bonds connecting the Germanium atom to the terminating functional group (in this case a methyl group) allow for very slight changes in properties of germanane by changing the terminating group. The layer dependent fluorescence of methyl germanane was sought out by mechanically exfoliating GeCH3 flakes onto a silicon dioxide on silica substrate and imaging them with a Raman microscope. Few layer flakes proved difficult to attain, although the general fluorescence of methyl germanane showed strongest under the 633 nm laser at an energy of 1.8eV. Since few layers were so difficult to find, we attempted to use a terraced silicon dioxide on silicon substrate to identify a different silicon dioxide thickness that could potentially make thin flakes more visible. Originally exfoliating titanium disulfide onto the terraced substrate showed promise for this method. However, titanium disulfide is easier to exfoliate than germanane, which causes problems in that even the titanium disulfide exfoliation was not uniform. Thus, exfoliating methyl germanane evenly across a terraced substrate proved to be an issue.

Project Title: Optimization of QD-DNA-Au System for   Use in QSTORM

Abstract: Several variables were tested in order to optimize a quantum dot-DNA-gold nanoparticle (QD-DNA-Au) system for use in QSTORM. It was found that the most reproducible results were obtained for samples that were mixed together and separated just prior to testing in a fluorimeter. The concentration of phosphate-buffered saline (PBS) present in the solution was also found to play a role in the reproducibility of the results. When two different types of quantum dots were tested in the system, it was found that –COOH quantum dots are more effective in the QD-DNA-Au system than streptavidin quantum dots. Finally, an increase in fluorescence during exposure to 450 nm light observed for all samples tested indicates that the strands of DNA connecting the quantum dots and gold nanoparticles are not hybridizing effectively.

Abstract: Two dimensional materials are becoming increasingly prevalent in various disciplines of science, and all rely on easy optical identification of samples for efficient preparation of devices and experiments. This study implements a method of terracing Silicon Dioxide on bulk Silicon substrates with hydrofluoric acid to study the visibility of 2D structures on varying thicknesses of SiO2. Graphene is used as a proof of concept, confirming that it has highest contrast (highest visibility) on 100 and 300 nm of SiO­2. Existing theoretical models for thin-film interference are used to predict contrast of materials. The terracing method is then used with methyl-terminated germanane and titanium disulfide nanolayers, showing a clear thickness dependence of the optical contrast.