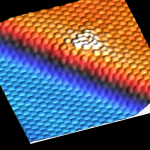 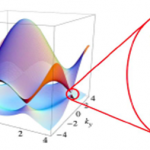 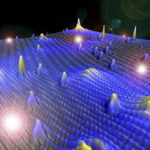 The Center for Emergent Materials engages researchers from multiple disciplines to work in teams on scientific problems too complex for a single researcher to solve. The CEM, established in 2008, is located at The Ohio State University and funded by a National Science Foundation MRSEC award.

Researchers have discovered a new electronic property at the frontier between the thermal and quantum sciences in a specially engineered metal alloy – and in the process identified a promising material for future devices that could turn heat on and off with the application of a magnetic “switch.”

“Solid-state heat switches without moving parts are extremely desirable, but they don’t exist,” Heremans said. “This is one of the possible mechanisms that would lead to one.”

In physics, an anomaly – the electrons’ generation and absorption of heat discovered in this study – refers to certain symmetries that are present in the classical world but are broken in the quantum world, said study co-author Nandini Trivedi, professor of physics at Ohio State.

The research was published June 7, 2021 in the journal Nature Materials.

This new fellowship competition is open to everyone. The duration of the fellowship is 2 years, extendable to 3, and a research budget will be provided. Salary will be commensurate with experience. Underrepresented minorities, women, individuals with disabilities, and veterans are encouraged to apply.

Criteria for selection of the successful candidate are (1) creativity and potential impact of proposed research, (2) strength of research accomplishments, (3) alignment of proposed research with activities of CEM IRGs, and (4) statement of commitment to diversity and inclusion. Research statements should include a clear plan of study that aligns with either or both of the Interdisciplinary Research Group (IRG) projects. Candidates should have a Ph.D. in Physics, Chemistry, Materials Science and Engineering, Mechanical and Aerospace Engineering, or related field of study. Candidates are highly encouraged to contact one or more current IRG members to discuss feasibility and alignment of their research proposal.

Congratulations to CEM graduate researcher Brandi Wooten for winning a SMART (Science, Mathematics and Research for Transformation) Scholarship from the Department of Defense.

Brandi will be assigned to the Army Research Lab (ARL) – Sensors and Electronic Devices Directorate (SEDD) in Adelphi, MD. She will spend her summers there (beginning in 2022) until she graduates. Afterwards, she will will work there for as many years as they fund her (~2 years).  They make materials atom by atom (a process known as molecular beam epitaxy), then they ship the samples to her where she measures the topological electronic and magnetic properties. Through the scholarship program, she will develop both skillsets, which will be great for future employment opportunities.